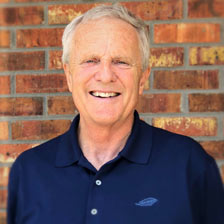 Rick is married to Sharon Quinn.  They have three sons, Matt Quinn (wife Jessica), Jordan Quinn (wife Angel), and the late Tyler Quinn.  Rick is affectionately known as “Pops” to his four grandchildren.

In the fall of 1978 after graduating pharmacy school, Rick Quinn partnered with two local doctors opening Medical Plaza Pharmacy.  Approximately five years later, Rick ventured out on his own and relocated the pharmacy across the street to its current location which allowed him to offer more services including three drive-thru lanes.

Rick has brought Medical Plaza Pharmacy, consisting of five employees and filling prescriptions with an old-school typewriter, to employing over eighty staff members and utilizing the most up-to-date pharmacy software, robotic pharmacy management and automated systems, and medication adherence packaging technology all the while striving to help each and every patient to have a better quality of life.

Thank you, Rick for taking that leap of faith in opening a pharmacy over forty years ago and impacting so many lives.