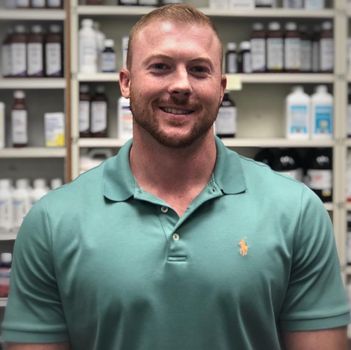 Daniel began his career with Medical Plaza Pharmacy as a Pharmacy Technician in December 2005, later becoming a Staff Pharmacist in 2010.

Daniel is originally from Corinth, Mississippi. After graduating from Kossuth High School in 2004, Daniel attended the University of Mississippi School of Pharmacy, graduating in 2010 with his Doctorate of Pharmacy degree.

Daniel is married to Erin Hinton and they have three beautiful daughters, Livy Brook, Lana Reece, and Lyza Daniel.

When Daniel isn’t working at Medical Plaza Pharmacy, he enjoys hunting, fishing, and working on his small cattle farm.

When asked what he likes most about working at Medical Plaza Pharmacy, Daniel said he enjoys the family atmosphere here and working for a place that does so much for the community.